I have heard great things about Primal Pit Paste

so I decided to try and make my own. 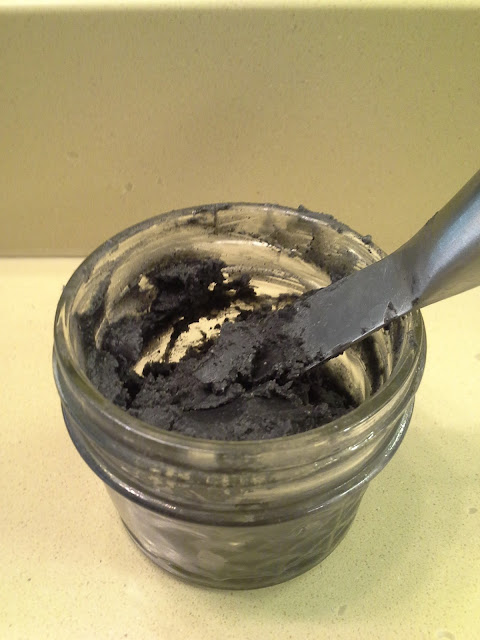 Mine was slightly messy...and black. But here's what worked for me - you can play around with the quantities to get a harder/softer, stronger/weaker, more/less scented deodorant.

and ground it in my mortar and pestle.)
1 Tbsp baking soda
1 Tbsp corn starch
10 drops of tea tree oil (or sub in another antibacterial oil like orange, lemon, or rosemary - be advised that lemon and orange will react with and deactivate your baking soda - turning it into carbon dioxide and water)

Directions
Melt the coconut oil and shea butter together in a double boiler or just put it in a jar and stick it in bowl of really hot water. Then stir your other ingredients. Come back and stir it occasionally as it cools down. Once it's semi-solid, you can start using it.
To use: Take only a small pea to dime sized amount with your index and middle finger. Rub that into your armpit area until it's fully incorporated. The color should fade from blackish to light gray. Let your underarms dry for a minute, then get dressed.
Using this method, I have not noticed any staining on my clothes and I have had complete coverage for up to 3 days without showering, wearing perfume, or adding extra deodorant (TMI, but it's true!)

I wore it working out. I still sweat, but the sweat didn't smell bad. I was not a fan of the tea tree oil smell and may adjust that going forward. But be advised that the tea tree oil scent only lasted an hour or so before it dissipated. Enough time to do it's important job and then skedaddle?

Update: After using this deodorant for a month, I noticed it was staining my white clothing black. Just on the inside, but still. I started to play around with ingredients and  I found something that ended up working much better for me.

Magnesium oil. What is that? Basically it's an equal mixture of water and magnesium chloride

by volume (so mix 1 cup water to 1 cup MgCl2, for example.) I mix it up, put it in a spray bottle and spritz it on my pits each morning. I happened to have this lying around because I put magnesium sulfate (epsom salts MgSO4) and sometimes MgCl2 (it's stronger) in my bath water to relax my achy muscles.

Now... it does burn the first few times you use it. I know, this seems like a deal breaker, but it's not. It only burns the first time or so. Apparently, it only burns until you no longer have a magnesium deficiency (according to Dr Google but that just doesn't make a lot of sense.)

All I know is the burning no longer happens to me and I spray it on every morning. I no longer smell bad. Yay! I have even found it to be a helpful deodorizer in the lady areas. That was surprising and very helpful. And no burning down there either.

So if you venture into the world of non-toxic deodorants, and you find yourself on a similar path, I hope you are able to learn from my story.

On a similar note - Milk of Magnesia

is also touted as a great deodorizer. You just dab it under your pits and let it dry. Unfortunately, I could not find a decent MOM in my area that did not contain flavors or bleach. The only one I found was at Walgreens and cost over $6 for a small container. That seemed like a rip off. The same size jug is a dollar at the dollar store. Of course, the dollar store stuff contained bleach.... I checked Walmart, Target, the dollar Store, and Walgreens. ***UPDATE*** Amazon has a bottle of milk of magnesia without bleach.

Both MOM (milk of magnesia - magnesium hydroxide MgOH) and MgCl2 are absorbed through your skin. This will increase the amount of magnesium in your system. That's not a bad thing but could turn into a bad thing if it's over done. Read up on this and keep yourself informed.  I am personally not worried about it.

I am more worried about the aluminum and petroleum in my previous deodorant.

IF YOU MADE IT THIS FAR.....YOU MIGHT WANT TO CHECK OUT THIS POST - Detailing my experience with homemade deodorant for 7 months, no hair washing with anything but water for 3 months, and using period underwear instead of disposable pads.