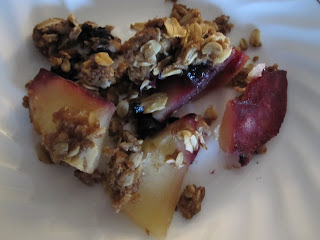 Whenever I hit a big apple sale, I either make apple rings, sauce apple crisps. Below is a recipe for my favorite apple crisp - Blueberry apple crisp. I make my apple crisps with less crisp than most people (half to be exact.) So if you like a lot of the crispy topping, feel free to double the crisp portion of the recipe. You can adapt this recipe by swapping out almost any fruit. I like to make peach crisps, and all sorts of apple/berry combinations.
Blueberry Apple Crisp (with half the crisp - double all but the fruit if you light a lot of topping)
3-5 Apples
1 cup of blueberries (frozen is fine)
3/4 cup flour (I use half whole wheat, half all purpose)
1/2 cup brown sugar
1/2 cup sugar
1 tsp cinnamon
3/4 cup oatmeal
1/2 cup melted butter
Peel and cut enough apples to fill the bottom of a 9 x 13 pan. Sprinkle with blueberries. Mix the remaining ingredients. It should be crumbly. Press the mixture onto the apples. I usually just dump it on, but my husband stamps it down tight. Bake at 375 for 35-45 minutes. Until the apples are soft and the crisp is slightly browned.
If I'm making this for just me and the kids, I'll half the butter and sugar and add in some shredded coconut, pecans, or walnuts. It's easily adaptable. So have fun with your fruits and make them into a tasty crisp before they become over ripe.

September 27, 2016
It's been 9 months since I bought my first pair of Thinx underwear. Since that time, I have transitioned to 90% reusable period products . I've figured out how to wash them, get them to stop being stinky , and when to use them.  I first heard of Thinx when a friend of mine showed me an article on Facebook.The article was an obvious paid to endorsement. I was disappointed that my friend couldn't see through the propaganda, but it did motivate me to dig deeper into reusable menstrual products. So I bought my first pair - I used a $10 off coupon and first time customers got free shipping. ( This link will give you $10 off if you decide to give them a go.) The first thing I did when they arrived was try them on. They fit well and looked really good. Fancy even? Well, maybe not for most people but they had lace and that is fancy in my world. I then tested them with a syringe of water to be sure that they could actually hold the liquid they claimed. They passed. I bo
14 comments
Read more

June 07, 2010
Can you fix broken plants with tape? YESSSSSS! Read on to hear how I have done it many times and how you can fix your plants too. A snapped Blueberry plant repaired with electrical tape and twine I take care of a lot of plants. And when I run out of plants, I take care of my neighbors' . Every once-in-a-while, I learn something that's worth sharing. This is one of those things. I found out that you CAN save plants by using tape. This winter, someone stepped on the main stem of one of my blueberry bushes and snapped it in half. I noticed it as soon as the snow melted and was devastated. It takes 3 years for a blueberry bush to "be ready" and it was year three. And the main stem was snapped clean off. So I did what anybody would do in an emergency like this. I hit the garage for whatever tape I could find. My husband had recently taught me that electrical tape sticks to nothing - but itself. And it sticks to itself well. I grabbed the electrical tape  from t
17 comments
Read more