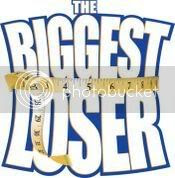 Did you watch The Biggest Loser last night? Oh how I love that show. But it seems different this season and I wanted to chat about that for a second.
>> Does it seem like the workouts just aren't as an intense this season? It seems like Bob and Jillian just aren't pushing the contestants very hard this time around. Sure, they're yelling and swearing (which is overdone and annoying) but the contestants are walking slowly, pedaling slowly, lifting slowly...
There have been no hikes up the mountain, no runs to Subway to get lunch, no ultimate wall squat challenges.... Maybe I'm just expecting too much too soon, but I hope they get to some extreme fitness soon.
>>Does it seem like the contestants this season are just way too emotional? Hasn't everyone on the show cried at least once already? Weren't they super crazy about calling home, and it was only the second week! There's been a lot of man crying and that just makes me uncomfortable. Sorry, that's just how I roll.
>>What's up with Daniel coming back? I gotta admit that when he stepped out of the limo last week just in time to run the 1 mile race, I was crying FOUL! He says he works out 4 hours a day, and most of these people probably haven't worked out at all in the last year. How fair is it to have him run against them? And they had to run in the sand!!! Does anyone know how hard that is?!?! I was disappointed.
After this week though, I like Daniel. He seems genuinely supportive and interested in the success of is partners. I like him now and hope he finally reaches his goal.
>>Final thought:I hope this season kicks it up soon. My motto for Biggest Loser this season: Less Crying; More Puking!